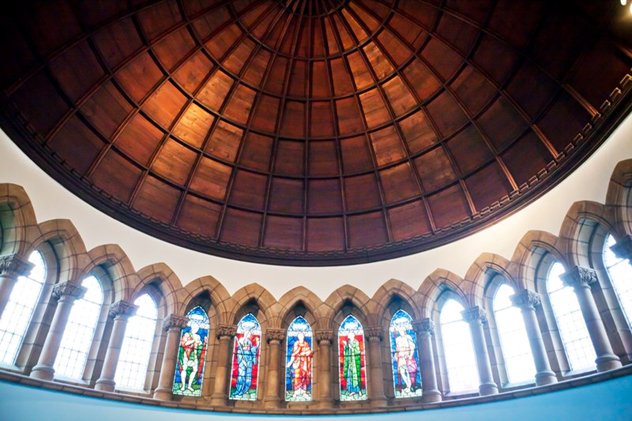 The Unitarian movement started within the nonconformist Christian tradition. It grew out of the Protestant Reformation of the sixteenth century. The earliest organised movement was in Poland and Transylvania (part of present day Romania). In Britain, there were some early radical reformers expressing Unitarian beliefs in the sixteenth and seventeenth centuries, at a time when such beliefs were persecuted as heretical, such as John Biddle (1615–62). However, the first proper Unitarian congregation came together in Essex Street, off The Strand, only in 1774. It was founded by Theophilus Lindsey (1723–1808), a former Church of England minister. You can read more about Unitarian history here.

The Richmond congregation had its origins in the Richmond Sunday Afternoon Society, formed in 1884 ‘to discuss religious and kindred subjects’. The congregation established itself in a meeting space, Channing Hall, in Friar’s Lane, off Richmond Green, from 1888. The philosopher Bertrand Russell attended there as a young man (his family was instrumental in founding the church), and the future Labour prime minister Ramsay MacDonald gave sermons at Channing Hall.

The present church building, dating from 1896, was designed by the architect T. Locke Worthington and built by the builders Holloway Brothers. It includes an apse with five stained glass lancers, dating from 1912, by the Pre-Raphaelite artist Edward Burne-Jones. A rear extension, designed by Kenneth Tayler, was opened in 1966, using some funds from the Bell Street Mission in Marylebone, which had closed in 1963. The Richmond Unitarian congregation merged with the Putney congregation in 1985.